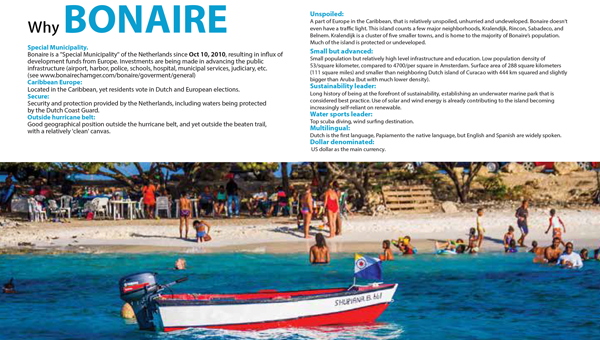 Special Municipality:
Bonaire is a “Special Municipality” of the Netherlands since October 10, 2010, resulting in influx of development funds from Europe. Investments are being made in advancing the public infrastructure including the (airport, harbor, police, schools, hospital, municipal services, judiciary, etc. (see www.bonairechamger.com/bonaire/government/general).

Caribbean Europe:
Located in the Caribbean, yet residents vote in Dutch and European elections.

Secure:
Security and protection provided by the Netherlands, including waters being protected by the Dutch Coast Guard.

Unspoiled:
Part of Europe in the Caribbean, that is relatively unspoiled, unhurried and undeveloped. Bonaire doesn’t even have a traffic light. The island counts a few major neighborhoods, Kralendijk, Rincon, Sabadeco and Belnem. Kralendijk is a cluster of five smaller towns, and is home to the majority of Bonaire’s population. Much of the island is protected or undeveloped.

Small but advanced:
Small population but relatively high level infrastructure and education. Low population density of 53/square kilometers, compared to 4700/per square in Amsterdam. Surface area of 288 square kilometers (111 square miles) and smaller than neighboring Dutch island of Curaçao with 444 km squared and slightly bigger than Aruba (but with much lower density).

Sustainability leader:
Long history of being at the forefront of sustainability, establishing an underwater marine park that is considered best practice. Use of solar and wind energy is already contributing to the island becoming increasingly reliant on renewables.

Dutch is the first language, Papiamento the native language, English and Spanish are widely spoken.

Dollar denominated:
US dollar as the main currency.